The Windows application NUIA Full Focus directs the user's gaze towards the camera during video calls. In this way, it conveys constant eye contact to the conversation partner, even if the user is studying something else on the screen. 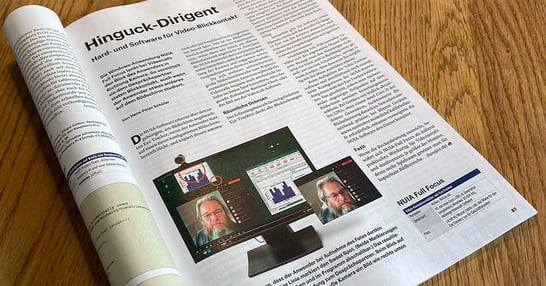 The NUIA software detects when the user briefly looks at a previously configured screen area via the associated eye tracker attached to the screen and copies this automatically or at the press of a key into the so-called sweet spot. This is the screen area directly below the camera position when it is attached to the upper edge of the screen as usual. There, the NUIA user can still view what he wants, but looks in the direction of the camera and establishes direct eye contact to his conversation partners.
Since several screen areas of different sizes can be marked for copying, users can also conveniently view changing content in the sweet spot during the video call, such as the business chart currently being discussed or the video stream of the video conferencing software.

Spatial limits
The detection range of the included eye tracker covers all viewing directions of the user on one large monitor or on two neighbouring monitors. Unfortunately, the software does not copy content from a second monitor.
Another disadvantage arises with devices that have the camera placed directly above the keyboard: With these, the sweet spot can at best be placed just above the camera and the user always seems to fixate a point above the face of the conversation partner(s) during a chat. This then comes across as snooty.
At least the software gives a hint when the caller turns away from the camera for a longer period of time or assumes an unfavourable sitting position, so the conversation partners might feel ignored.

Independent of video calls, the so-called mouse teleport proves itself: If you nudge the mouse pointer a bit in the direction of a currently targeted button, it jumps exactly there without having to carefully align it with the mouse.
When installing the Tobii driver software and then again when configuring the NUIA application, you have to calibrate the Eye Tracker. This is done by aiming at or clicking on successively displayed target points on the screen. Devices with reasonably up-to-date CPUs, such as a third-generation Intel Core i5, worked sufficiently precisely in the test; older devices at least required additional calibration runs, and the NUIA software sometimes refused to work completely.

Conclusion
If the computing power is sufficient, NUIA Full Focus proves to be an extremely practical tool for video calls and conferences. The larger the monitor, the more leeway you gain for copy-able image areas.