Until now, eye control for computers was only something for people with disabilities or for gamers. Soon it will be part of everyday life. 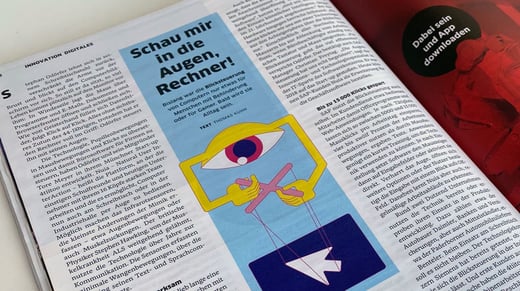 Look me in the eye, computer!

Stephan Odörfer leans back in his chair, crosses his arms in front of his chest and looks at the computer screen in front of him. As quietly as he sits there, so much life suddenly comes to the monitor in front of him: In no time at all, the mouse hunts over programs and e-mails. Documents and browser windows open and close. Data fields are filled up as if by magic, followed by click after click. All without any visible intervention by the 44-year-old, yet he has full control of the computer: Odörfer controls it with his eyes.

Odörfer and his co-founder Tore Meyer developed the technology to translate pupil movements into mouse movements and clicks and thus control office software for companies in their Munich-based start-up 4tiitoo. NUIA - Natural User InterAction - is the name of the platform on which the former school friends and current entrepreneurs are working with their strong team of 16 and which now makes it possible to operate computers by eye even at the desk or on the industrial floor. This is made possible by infrared sensors that detect the smallest changes in facial expressions - such as eye movements or muscle twitches. British physicist Stephen Hawking, largely paralyzed by the muscle disease ALS, used the technology for years to communicate. The sensors detected minimal cheek movements, which Hawking used to operate his text and speech computer.

But the technology remained as a special application for a long time. In addition to people with physical disabilities like Hawking, advertising researchers, among others, used it to analyze the reading behavior of test subjects. And providers such as Ergoneers from Munich, Pupil Labs from Berlin, imotions from Copenhagen or Mirametrix from Montreal supply so-called eye tracking systems for ergonomics research or to monitor in cars or airplanes that drivers or pilots stay focused.

Now, however, eye tracking is leaving the niche. The most important driver for this was the computer game scene. Manufacturers such as the Swedish specialist Tobii have developed inexpensive, compact sensors that can be connected to any computer. PC gamers in particular are already using eye trackers by the millions to control the focus of the game and the direction of the characters' gaze by moving their eyes. It won't stop at computer games, says Tim Bosenick, managing director of Uintent, a consultancy specializing in product usability. 'Gaze control allows faster, more natural human-machine interaction. The technology is ready for the mass market.'

4tiitoo founder Odörfer is also convinced that gaze control will soon make the 'digital anachronism computer mouse' largely obsolete. 'In software,' he points out, 'we have come a long way in the 21st century, for example through the use of artificial intelligence.' In hardware, on the other hand, things are at a standstill: 'To this day, we're still clicking our way across screens with technology from the 1980s.' Including all the disadvantages from mouse arm to distraction from the work flow when office workers constantly switch between keyboard and mouse. It's much more efficient with eye control," promises Odörfer. This is also confirmed by SAP manager Christian Freytag. 'Eye control really excited us,' says the innovation and technology specialist in the software company's IT division. He had come across the start-up in 2018. Today, SAP customers can order NUIA as an add-on for the business software.

SAP also uses gaze control itself. In customer service, for example, employees use it to operate office programs and web applications. Depending on the activity, between 5,000 and 15,000 mouse clicks can be saved per working day, and four to twelve percent of working time can be used more productively than with mouse movements, according to tests. Users only need a short training session to be able to use the technology. Depending on the setting, software then places the mouse pointer on input fields or activates them directly. If the eye remains still, further options open up or the user confirms the input by looking at the OK field. In addition, NUIA also learns to recognize regular workflows.

Around two dozen companies are already using the technology or testing its use in product development. These include the carmaker Daimler, banks and insurance companies, as well as medium-sized companies such as the Paderborn-based automotive supplier Benteler.

But it won't stop at the desk. The technology group Siemens has already tested whether and how gaze control can be used in industry. And the first customers from the automotive industry are already using the 4tiitoo platform at machine workstations. There, employees can now also record quality checks by eye control instead of having to enter them by hand.